skip to main | skip to sidebar

Well hello there! It's been a long, long time since I updated this blog of mine, but I could never disappoint you on Valentine's Day!

It's a long-standing tradition of mine that I make ridiculous Red Wings valentines for your use on Valentine's Day. Since high school, I have rued the fact that no store makes NHL valentines (at least not in any meaningful capacity).

For the last three years, I posted them at Octopus Thrower, but since I departed there nearly a year ago, I decided to put them up where I started blogging. There aren't as many this year as in years past, but there are some new additions. 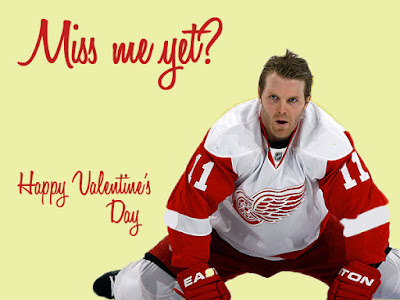 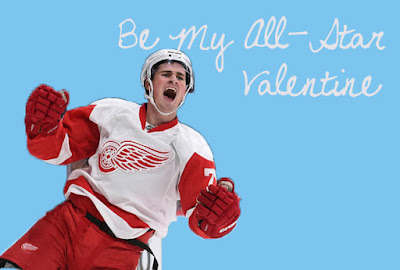 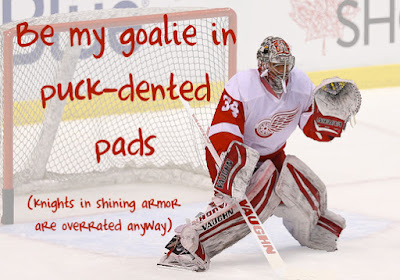 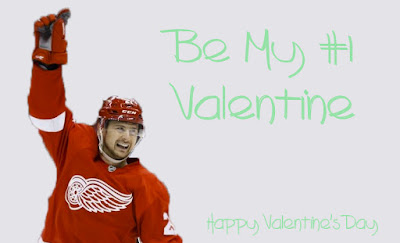 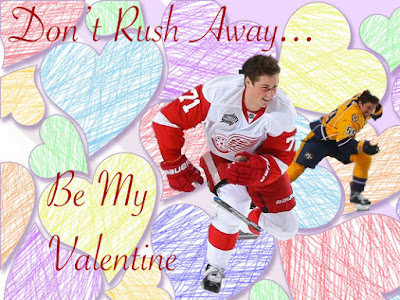 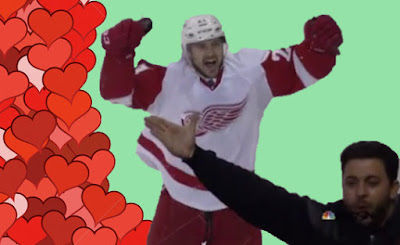 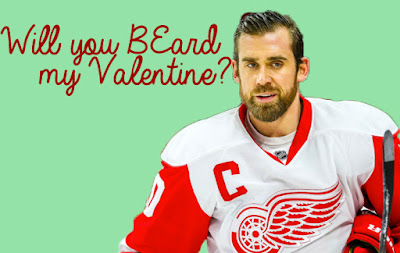 And a few vintage ones for you as well: 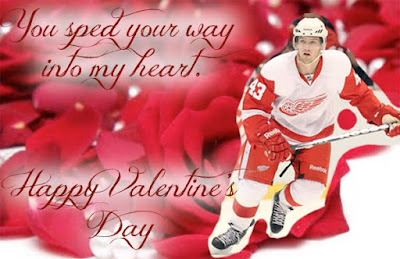 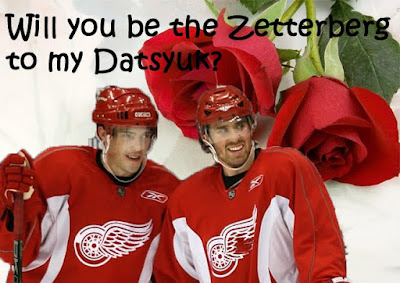 Posted by Christina at 9:11 AM No comments: 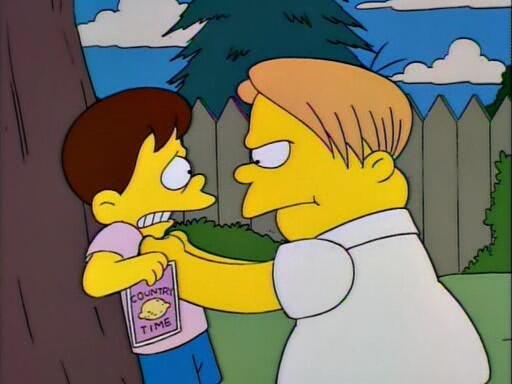 For the past two days, @helmerroids and I have been discussing Red Wings hockey on Twitter using altered quotes from The Simpsons. Case in point:

@helmerroids "The fingers you use to play hockey are too fat. To obtain a special playing wand, please mash the keypad with your palm now."
— Christina Roberts (@franzenmuth) December 17, 2013

@franzenmuth and now someone just said "radical" Lashoff is not going to be pleased. That's his thing that he says!!
— Sara Solstice (@helmerroids) December 18, 2013

It continued into today, and I finally got up the creative nerve to mash up The Simpsons episode "Lemon of Troy" with Red Wings hockey. Now, it's not going to be the episode in its entirety, but rather scenes that work with the Wings' situation right now.

This isn't supposed to make sense from scene to scene, though the characters stay the same. Just enjoy the nerdiness.

If you aren't a huge Simpsons nerd, you may not get much out of this. If you are and you love hockey...welcome, my new best friend(s). And enjoy "Lemon of De-Troy-t."

Read more »
Posted by Christina at 2:19 PM No comments:

Puck Daddy had an accurate description of Sidney Crosby chirping at Zdeno Chara during Game 1 of the Eastern Conference Finals.

It was so accurate and so hilarious that, despite it not being the Red Wings, I had to draw a silly doodle for it. 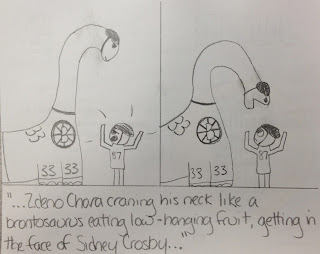 Nothing else really needs to be said at this point. Go Bruins.

Ever since the season started and I saw Larry Murphy wearing those goggle glasses that had me screaming, "WHAT ARE YOU DOING?!" at my television, I've had something on my mind. And it didn't hit me until a few days ago. 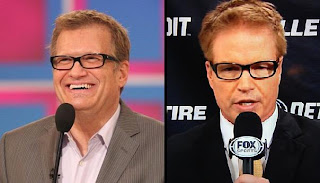 Frightening, yes? Can we get back to the Murph we all know and love, who raves about $1 hot dogs and beer? This one just doesn't feel right.

If you haven't caught up on your hockey news today, Helene St. James caught up with Henrik Zetterberg today and did the usual interviewing questions. The article ends with:

"Speaking of Switzerland, did Zetterberg bring back Toblerone chocolates for his teammates? Yes ... and no.
"I ate them all," he said."

How can I not draw a silly comic? Don't mind the fact that it's on a legal pad. (click to make bigger) 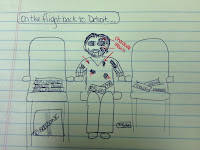 And, as @Whoabot added on Twitter: "Dammit Hank, where's my Swiss chocolate candy?!"
"Get your Tobler-own!! (laughter ensues) ...seriously, it's mine, go away."

It's not unlike Larry Murphy at home, surrounded by hot dogs...
Posted by Christina at 2:44 PM No comments:

Today has been a terrible day for hockey, especially if you're a Red Wings fan.

We were threatened with the Winter Classic being canceled all too soon. Then, we hear that Dominik Hasek has officially retired (which may be a relief to many fans who hated him and all the heart attacks he gave us during games). And to top it all off, one of the most iconic voices in Detroit, Budd Lynch, passed away this morning at the young age of 95.

Of course, Red Wings fans are devastated. I know I shed a few tears when I found out. And rather than reminiscing and discussing what a terrible loss this is for everyone, why not remember him by listening to his voice?

I have two soundbites for your downloading/listening pleasure (they are .m4a files since they are from my phone, FYI).

"Last minute of play in this period."

"Thank you, and...goodnight." (Feel free to agree and/or ignore my brother's comment after)

(*** If more are necessary, I have two videos I can add as well, one announcing the starting lineup, another announcing the three stars of the game.)

Rest peacefully, Budd Lynch. We know you're announcing games wherever you are.
Posted by Christina at 4:54 PM No comments:

I don't quite know where this is going to go. But let's just start writing and see where it takes us.

And I know I cannot be the only one who, upon the first two weeks of the season being canceled, said, "F#$k it, my threat is real. I will not support them."

Because I will not support a league that bullies its players by canceling their games and their seasons, and throws their fans out with the rest of the garbage and does not take into consideration the fact that this time around, with information more privy in this social media-centric age, fans are not as gullible as last time. They are taking away a large part of my life, something that feels like it's my only livelihood at times, and this is the third time in twenty years. I'm fed up.

Or am I? Is my assertion that my bluff isn't actually a bluff really just another bluff*? If they reached a deal tomorrow or even in December, and some of the season was salvaged, would I really stand by my word and not go to games, not buy merchandise?

Out to lunch with my coworkers today, I happened to glance over at the bar and froze when I saw Jimmy Howard. Seeing hockey players both out of uniform and in person always takes me by surprise...mostly because I never have encounters with anyone famous. They simply live on my television or computer screen.

Howard was there, taking it easy, having just finished the morning practice at the Troy Sports Center down the street. And Abdelkader sat down next to him.

And I had a slight spaz attack, which should embarrass me more than it did. After all, my coworkers have only known me for five months and do not know how serious my love for all things hockey and Red Wings is.

I'm not one of those fans that will bother players and ask for pictures or autographs if I see them out and about. They have their own lives and I certainly do not plan on being rude and interrupting whatever they're doing. Had they not left so quickly after I noticed them, I would have at least passed by, smiled, and told them, "I wish you guys were playing hockey."

As I watched them leave and meet up with two guys standing out front (which turned out to be Johan Franzen and Niklas Kronwall, whom had been sitting six feet away from me and probably heard every word I said to my coworkers about Abdelkader and Howard), I realized just how much I miss the sport.

I love it too much. I cannot live without the sport, without my Hockey Night In Canada, without my Detroit Red Wings. Just catching a glimpse of Red Wings players made my heart ache - and they weren't even playing hockey!

And when the four men left my sight and went on their way, I realized that no, my empty threats are not empty.

This team, this sport means far too much to me. I won't go so far as to say that I won't watch games on television. But I refuse to buy new merchandise, I refuse to buy tickets to games. Perhaps I should support what I love...

I've put up with enough work stoppages in this league to forgive them so readily this time around.

But here's hoping something happens soon. Or the NHL may have a lot more fans like me not supporting them and may not be able to recover from a canceled season as well as they did last time.

---
*If you're not a Simpsons fan, the book pictured is Don't Do What Donny Dont Does, which is just as clear as my sentence.
Posted by Christina at 3:51 PM No comments:

Christina
Hockeytown, Michigan, United States
I'm known as the craziest Red Wings fan that works at Caribou Coffee. I draw Red Wings comics about the [made up] hilarious things the players do on and off the ice. I wrote for Octopus Thrower, an NHL Fansided blog. My favorite player on the Wings is Johan Franzen. The title of this blog came from a typo when I tried to type Frankenmuth to a friend and lolzy conversations ensued about a magical land in Sweden with mule-drawn carriages.